Silverwood is the largest theme and water park in the Northwest. It has 65 rides including 4 giant rollercoasters. It also has Boulder Beach, a water park with several water slides, wave pool, and a lazy river.

We started our day in the theme park on the Log Ride which was a little disappointing. But afterwards the girls quickly found the Panic Plunge and Sky Diver which quickly made up for it. 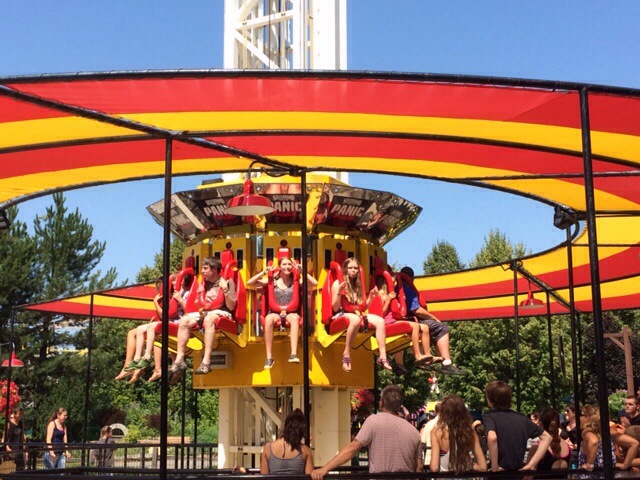 We grabbed some possibly the greasiest fried pickles imaginable and headed for the big coasters. First hitting Timber Terror, a big wooden coaster. You climb 85 feet into the air and drop into twists and turns and then enter a crushing hairpin turn at 55 MPH!

That was just a warm up. We headed for the next big wooden coaster – Tremors! This is one of the top rated wood coasters in the country. You climb 100 feet and then drop 103 feet into a tunnel that goes through the Tremors Gift Shop. You go through a total of four underground tunnels at a top speed of 63 MPH. Super Fun!

We tried to get on Thunder Canyon but the line was too long. It was in the upper 90s so we decided to head to the water park and cool off. But not until we stopped and took the short but fast roller coaster called Corkskrew.

Boulder Beach was a great relief from the heat of the day. The wave pool had good sized waves and was a quick way to cool off.

Only a few minutes into the Elkhorn Creek lazy river we were pleased to discover you could get a drink at the swim up bar and drink it in the cool waters while you floated down the lazy river. Better yet, they had Manny’s! A Darn Fine Beer.

Then we hit some slides to finish up our day; Rumble Falls, Velocity Peak, and Ricohet Rapids were a few of the highlights. 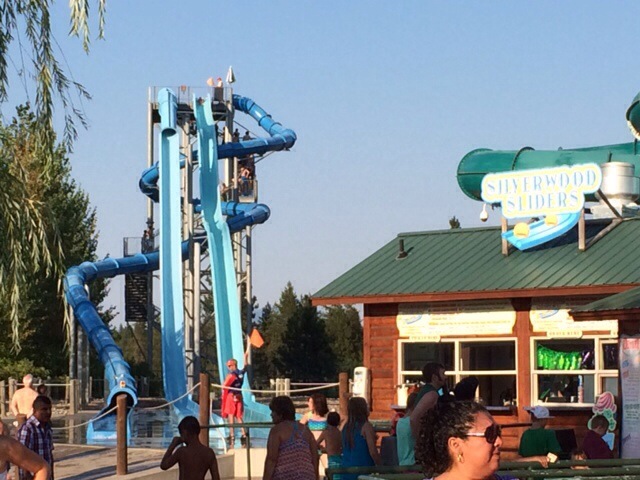 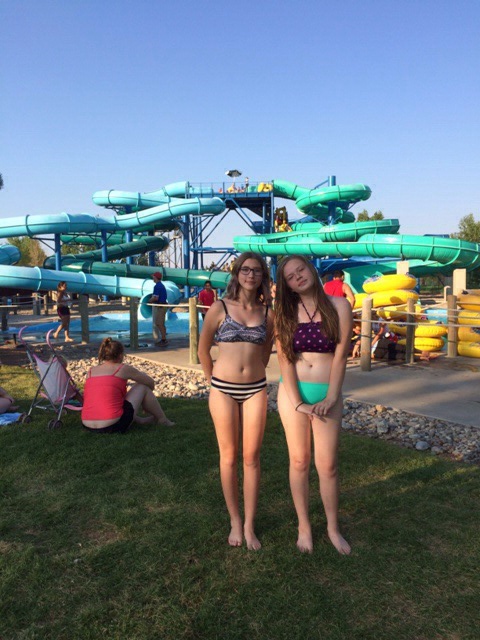 We returned to our camp site for quick showers, laundry, and dinner. But I wasn’t done. With the family exhausted I headed back into the park to hit a few of the extreme rides the ladies didn’t want to do earlier in the day.

First up: Aftershock! This coaster was voted best hanging coaster by the Travel Channel in 2012. A big metal monster that dominates the skyline at 191 feet! The “aftershock” is you get to do this ride twice. The first time forward and then the whole ride repeats in reverse! Upon getting off the ride I thought to myself, “What kind of diabolical mind would conjure up such a torture device?” It was truly a thrill ride.

But that was before I went on the SpinCycle. Truly a sick mind created this 104 foot tall cylindrical-shaped torture device. It seats 24 people at a time facing outward in a circle that spins. Then it starts to sway back and forth like a pendulum, gaining velocity until it begins to flip all the way over, suspending you upside-down for what seems like an eternity. Although I nearly lost my dinner it was perhaps the most thrilling ride I’ve ever been on. I’d have done it again if the park hadn’t closed. Good enough that I may be back.