Posted on September 1, 2018 by Marc Madenwald

Tuesday morning we found ourselves with several hours to explore Fort Stevens before driving to nearby Nehalem Bay State Park to meet Clara and her friend Lia later in the afternoon.

We drove to the South Jetty observation tower to spot ships crossing the Columbia River bar and arrived just in time to witness the United States Coast Guard rescue a teen stranded on a sandbar at flood tide. A gaggle of birders flocked with the Oregon Park Rangers, the Clatsop County Sheriff’s Office, the Warrenton Fire Department, and the Warrenton Police Department to watch the rescue unfold. 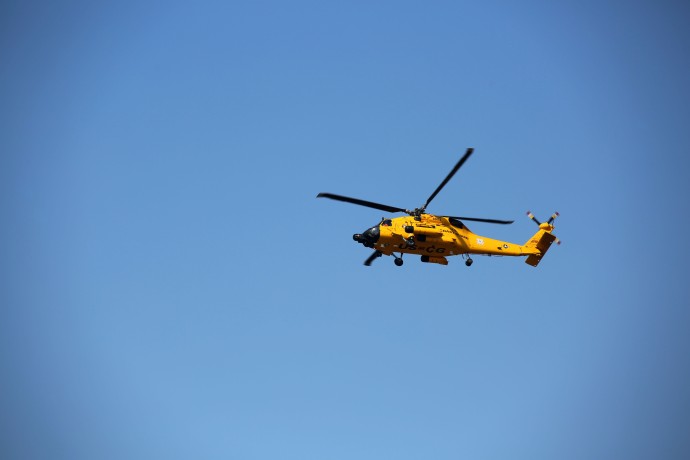 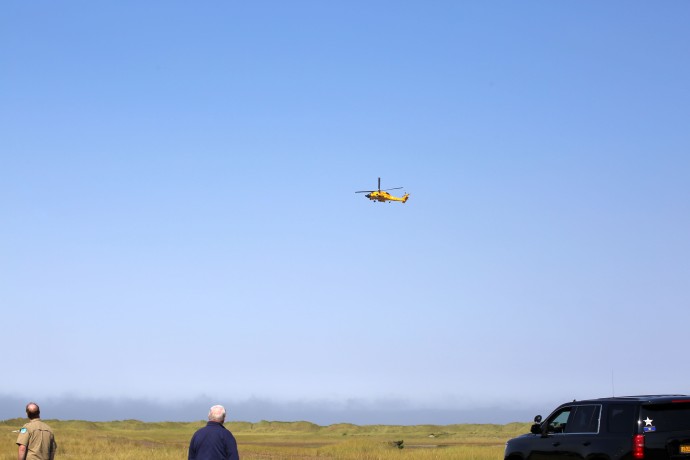 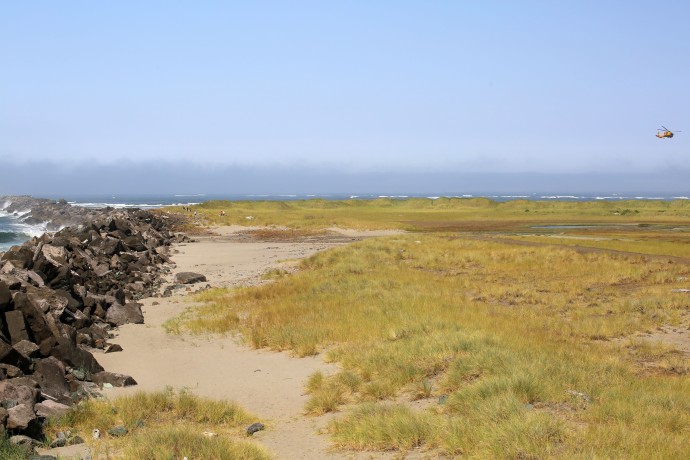 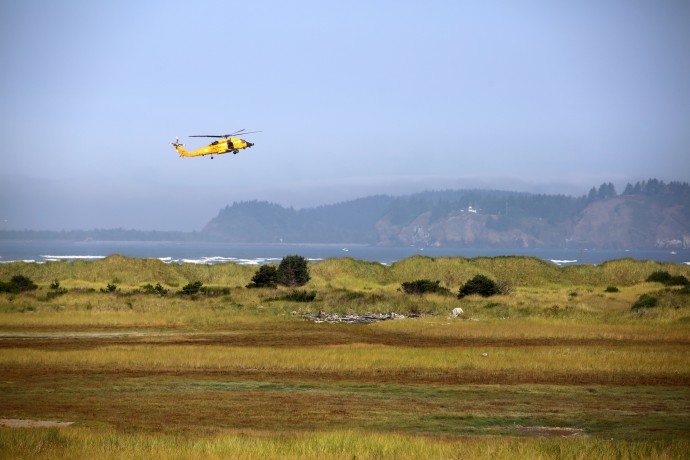 Landing to let teen reunite with his family

After the excitement was over we turned our attention to the surfers catching late morning waves along the jetty.

Catching a wave off Clatsop Spit 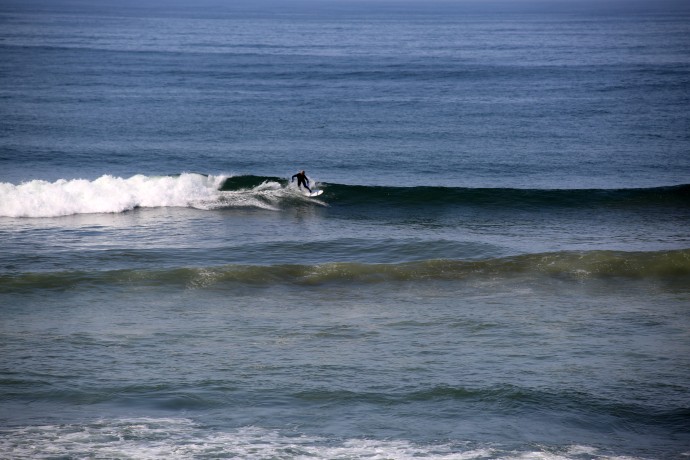 We walked the trail out to the South Jetty for a better view of the Columbia River and to spot endangered migrating brown pelicans. 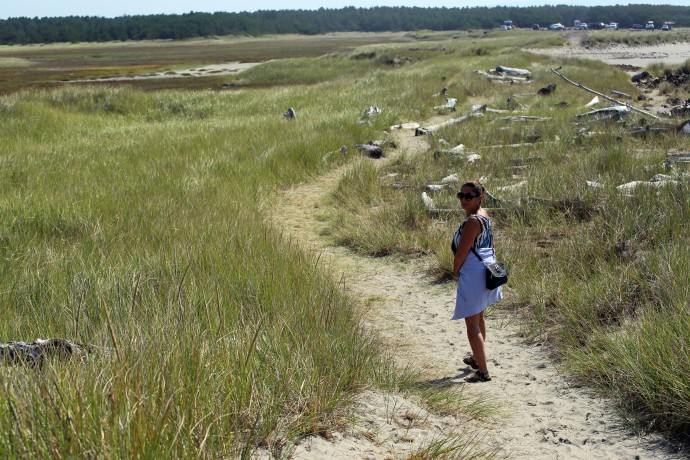 The trail to bird nesting area 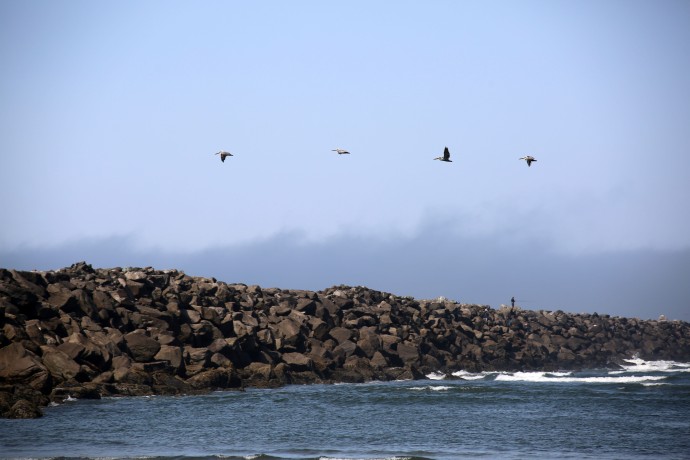 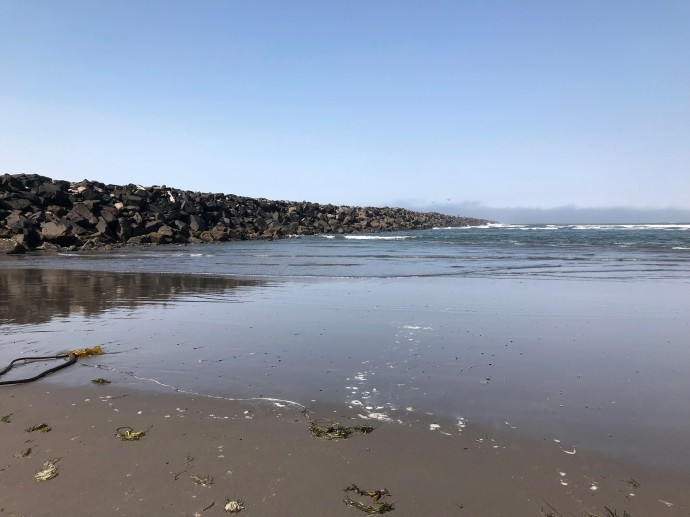 We packed up our site and headed south on Highway 101 towards Seaside, Oregon as we waited for our check-in time at Nehalem Bay State Park. We hadn’t been to Seaside in well over 15 years. We enjoyed a leisurely afternoon wandering through town and grabbing a quick lunch before heading to Nehalem Bay. 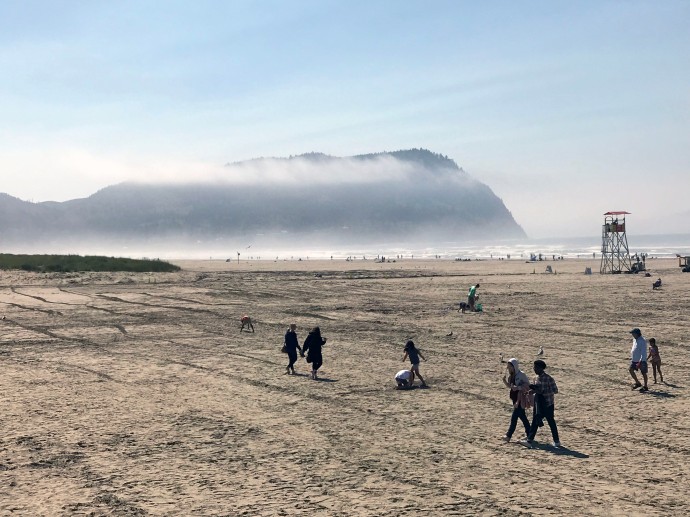 We arrived at Nehalem State Park with plenty of time to trick out our campsite with hammocks, chairs around the firepit, a canopy over our tableclothed picnic table, candles and fairy lights and a regulation cornhole game set. Clara and Lia arrived in their Volt from their first road trip just in time for dinner.

After dinner, we walked over to check out the horse campsites. Not being equestrians, we didn’t know camping with horses in a state park was a thing. But apparently, it is. And the sites looked really nice. 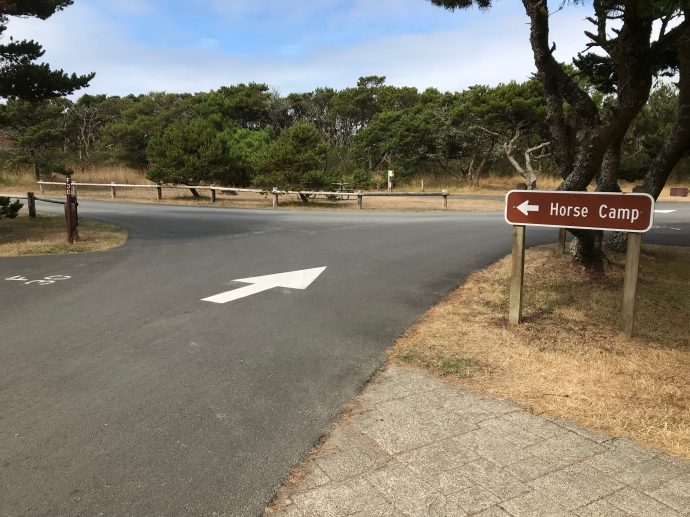 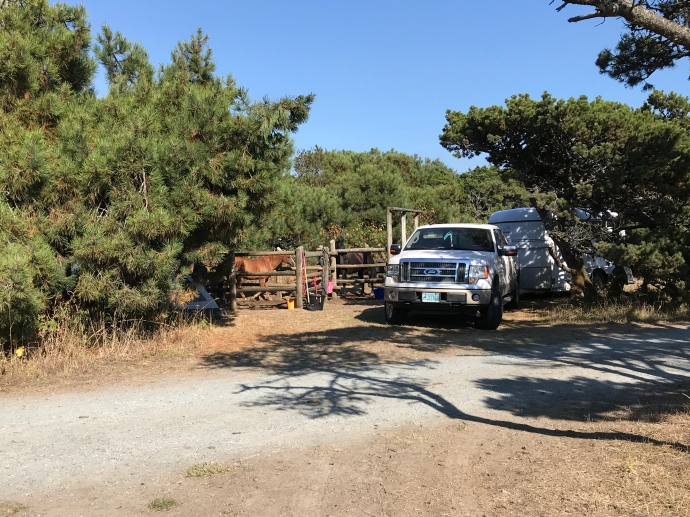 With wine glasses in hand and sand in our shoes, we navigated our way through trails of tall grasses across the dunes to the beach at Nehalem Spit for sunset.

Clara and Lia through the dunes 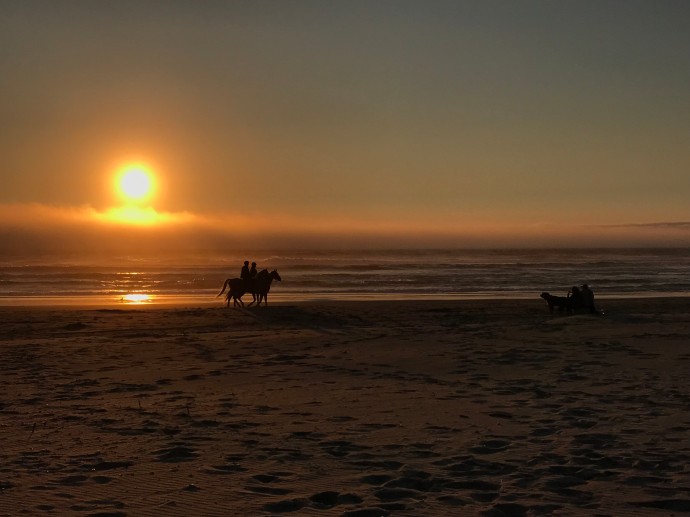 Riding into the sunset

Heading back to camp

As the sun set the temperature dropped and the marine layer quickly rolled onshore like a foggy quilt to tuck us in for the night. We kept it at bay with Lia’s pyro-maniacal campfire-making skills complete with toasty s’mores. It was a sweet ending to an already sweet day.

Posted on September 1, 2018 by Marc Madenwald

We were to travel to Eureka, Montana the last week of August for my friend Karl’s 50th surprise Virgo Barn Dance Party at his Frisky Chicken Ranch (aka Tobacco Valley Ranch). His better half Nikki had been planning it for over a year. Hoards of friends would be coming from around the country and the globe to celebrate a milestone birthday with live bands, brews from Homestead Ales, dips in Dickey Lake, and other sundried shenanigans.

But about a week ago, while we were in Maui dodging Hurricane Lane, Nikki contacted us with a heavy heart to call off the party. The smoke from the British Columbia fires as well as from the nearby Howe Ridge fire in Glacier National Park had left the air quality in Eureka “Hazardous” and “Very Unhealthy” as categorized by the Montana Department of Environmental Quality. We heard stories from home about the smoke from the BC fires in Seattle as well. We decided we were going to try and go anyway, even if the party was postponed until next year we love Karl’s ranch and we hadn’t been since August of 2014. We closely monitored the air quality authorities across Washington, Idaho, and Montana. It was bad. We made the decision at the end of the week that we’d abandon our plans for a road trip to Eureka with a side trip to Silverwood Theme Park and improvise a camping trip to the pristine salty air of the Oregon Coast.

We were lucky enough to reserve the last campsites available at Fort Stevens State Park and Nehalem Bay State Park during the busy last week of summer. Our r-pod was already packed and ready to go, so Tawny and I hooked it up and drove ourselves Fort Stevens arriving in the late afternoon. We quickly set up camp, had a surprisingly good dinner at the unassuming South Jetty Dining Room and Bar and then went to catch the sunset on the beach with the skeletal remains of a 112-year-old shipwreck of the Peter Iredale.

We returned to camp, decorated our Pod with lights, built a fire, and watched the dusky shadows of bats chase emerging stars on a calm and warm summer night. Tomorrow Clara and her friend would be driving their first road trip to join us at Nehalem Bay. 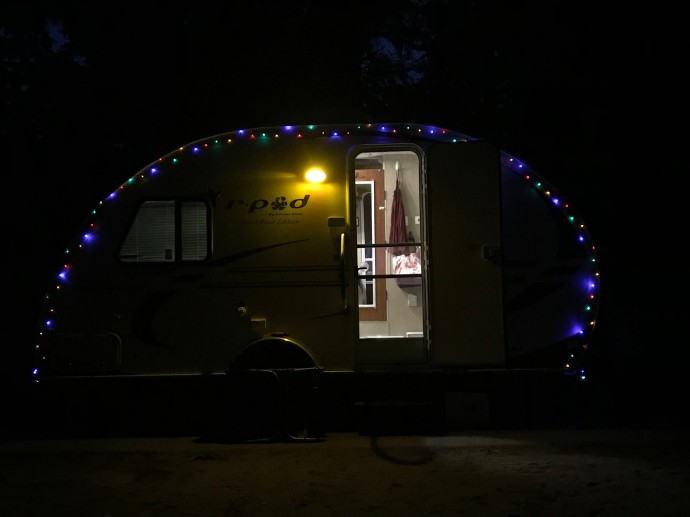