Another stormy night. Hot, but windy. Up early to visit Canyonlands National Park. But first we had a side trip to Dead Horse State Park which has a awe-inspiring overlook of Canyonlands. Its a Utah State Park and has an interesting story linked to its namesake. Its Utah’s “Grand Canyon”. At the visitor center we saw several animals. A sizable and colorful lizard, a large hawk, a desert cottontail, and many white tailed antelope squirrels. 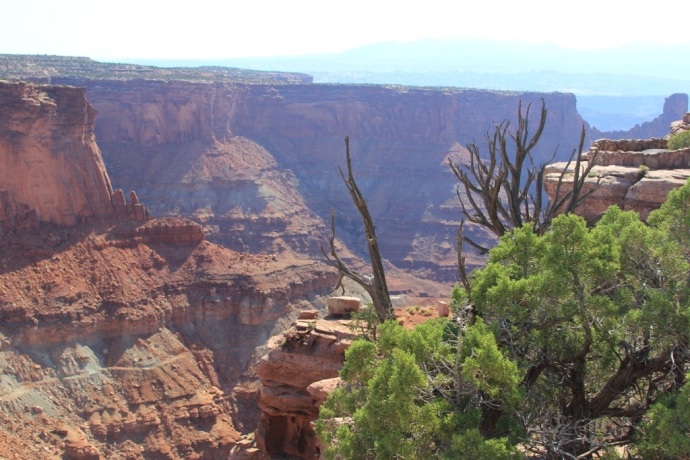 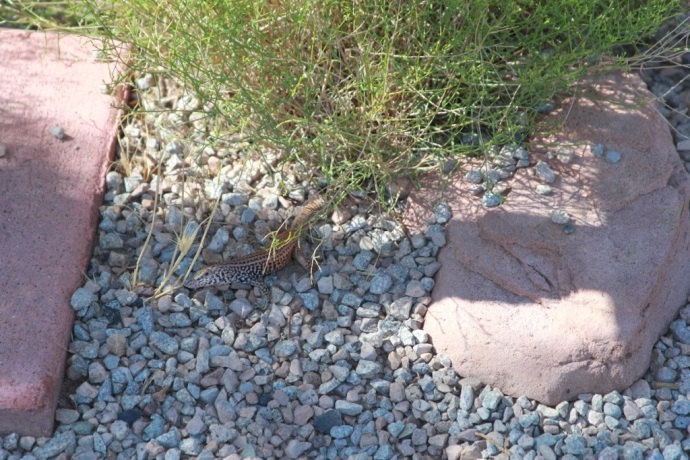 Then we headed on to Canyonlands National Park focusing on the Island in the Sky side of the park. Our first stop was a short hike to Mesa Arch, which rivaled any arch in Arches National Park. A sheer drop of hundreds of feet just beyond the arch…like a portal to another world. 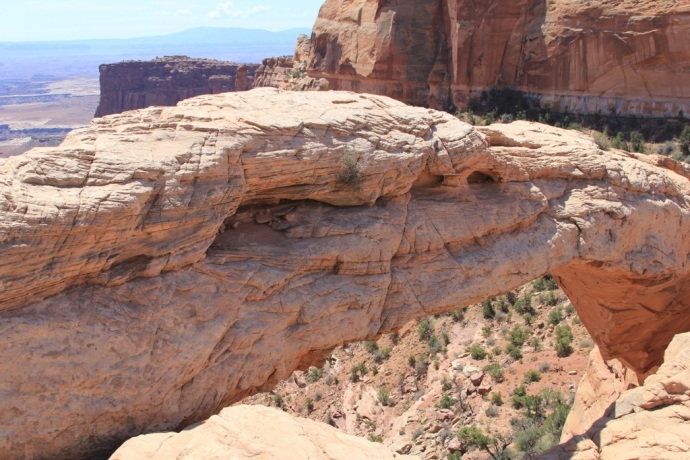 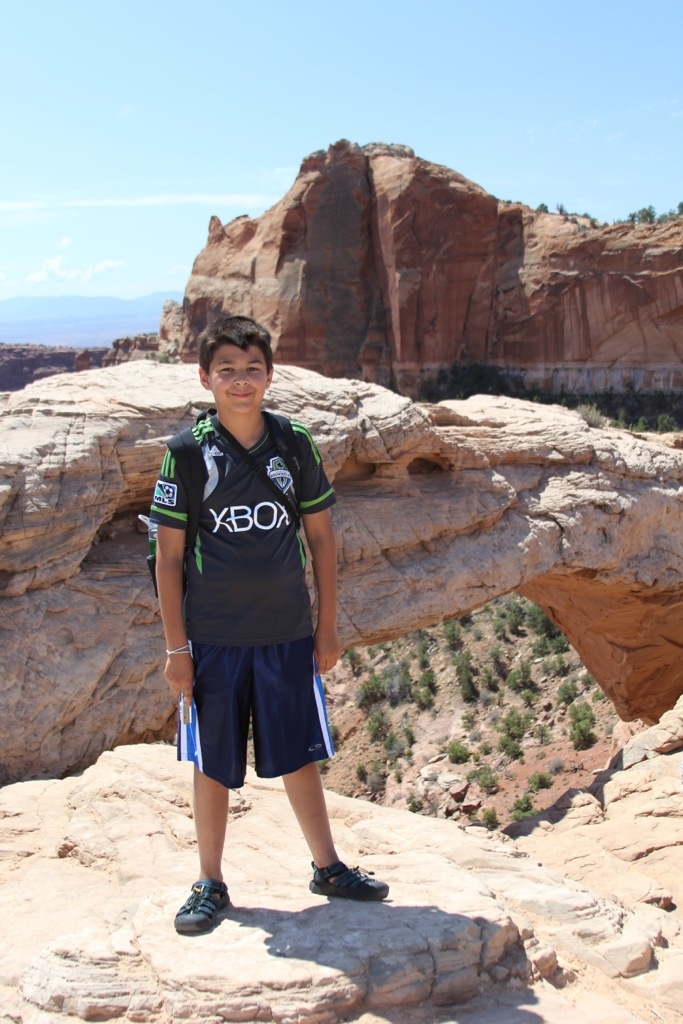 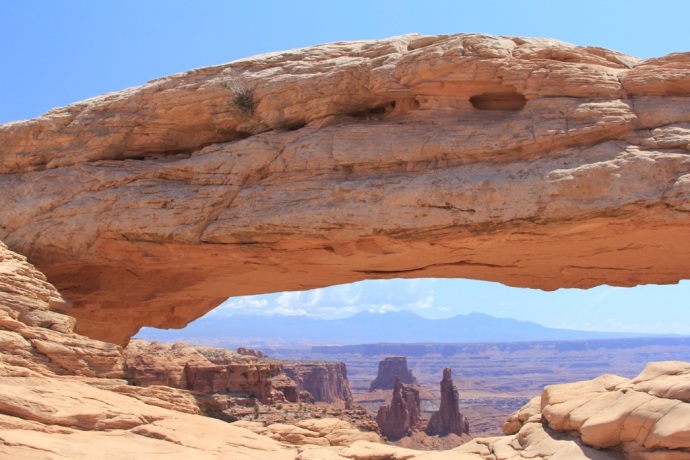 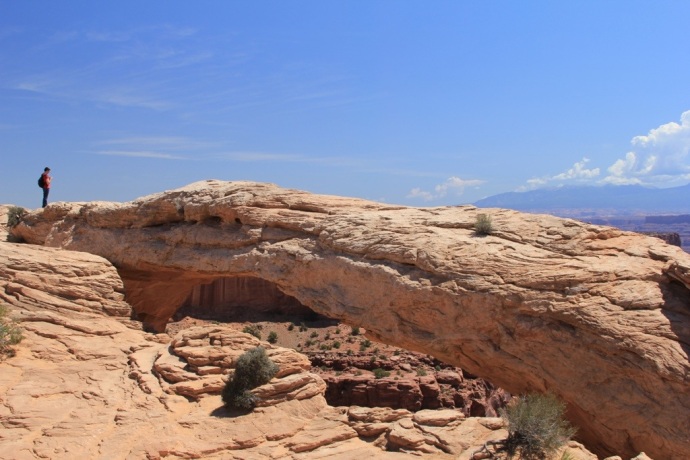 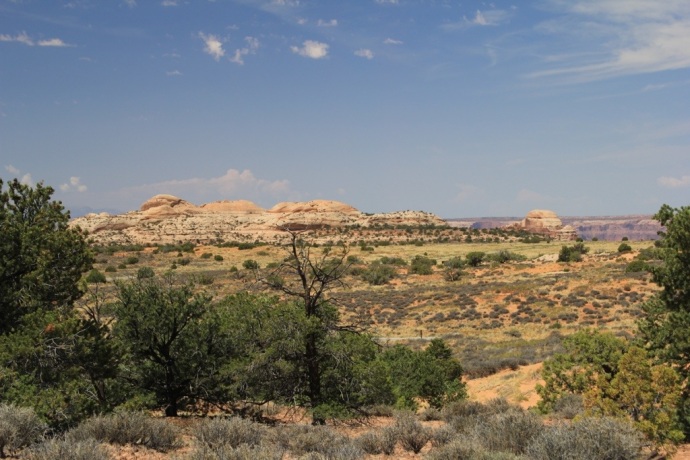 Next we went to Green River Overlook which had sweeping views across Canyonlands. 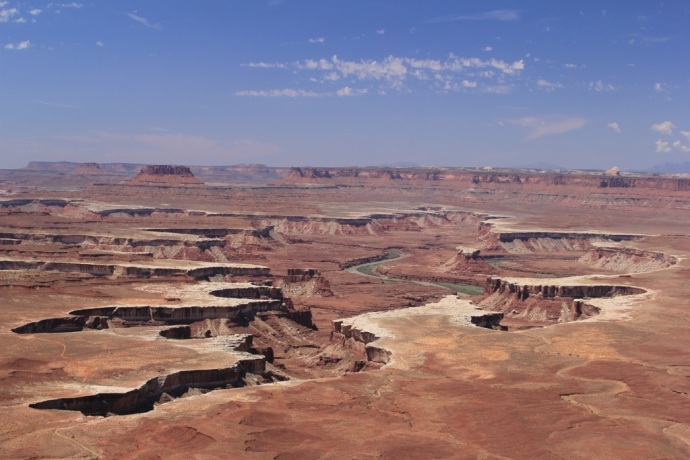 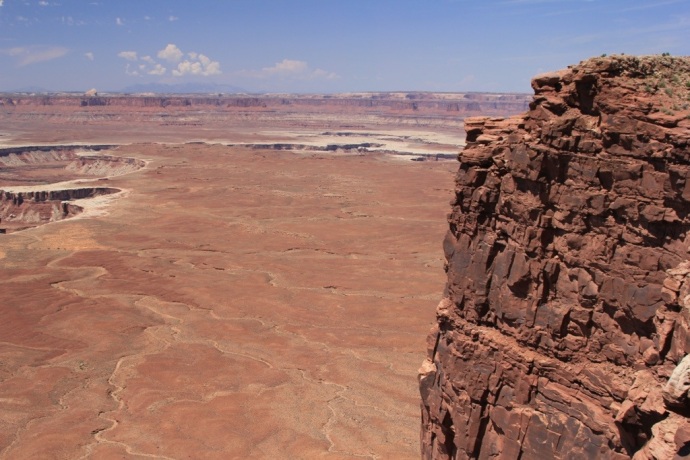 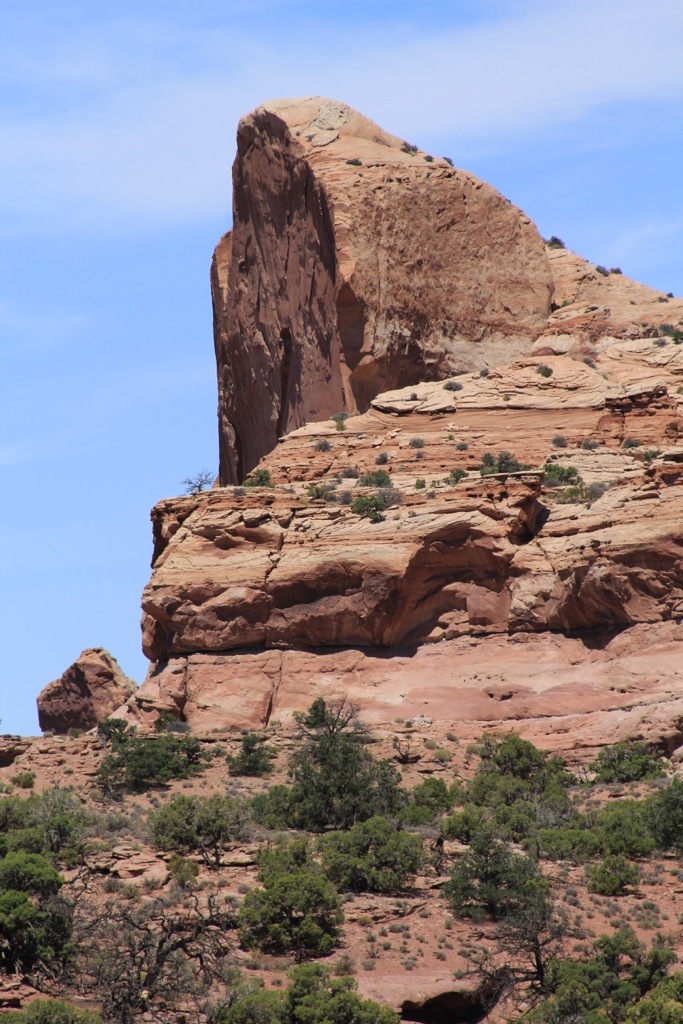 Our next stop was Upheaval Dome which is theorized to be the site of a meteor strike. Unfortunately the nearest view point was a 1 mile hike (in and another mile out) across sand and slickrock. At 101 degrees nobody was willing to make the 1 hour commitment to the walk. So we just took this picture instead and headed to Grand View. 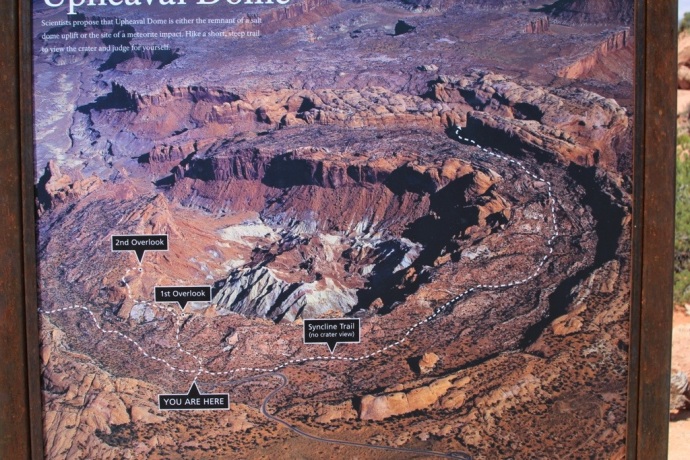 Grandview was just that – A grand view. We decided to have this end our day at Canyonlands. Stellar views. This is a park to visit again on bikes or for hikes in cooler times like spring and fall. Most of the park is back country and only accessible via dirt road, hike/bike trail, or raft. A tour by car was short but sweet and memorable. 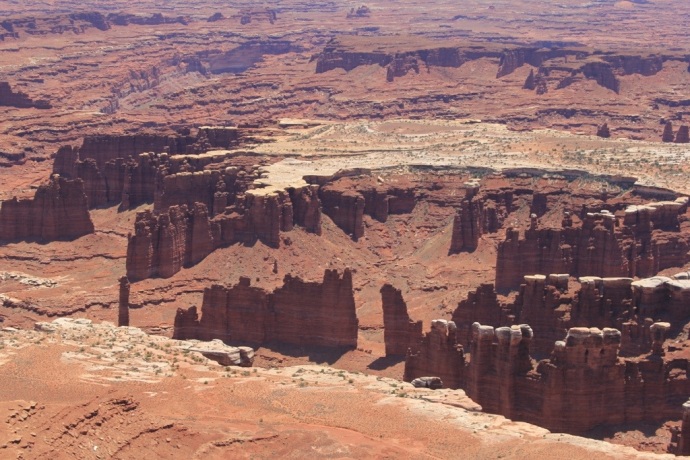 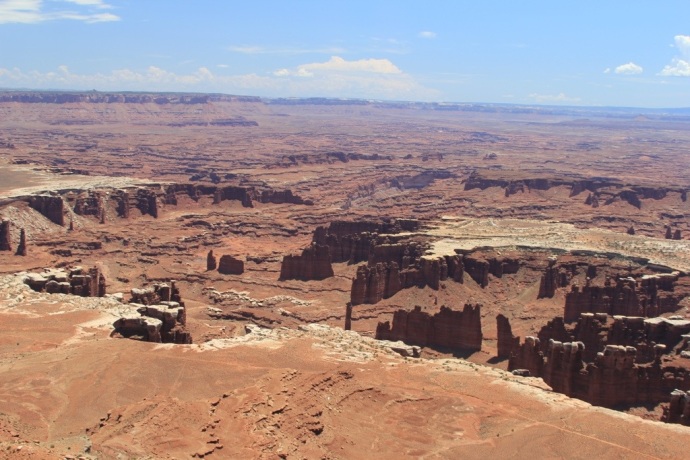 The kids had been good and only complained a little (and we only had to tell them to put down their devices and look out the f-bomb window a half dozen times. So we decided to take them to a dinosaur and geode place we had seen just outside of Moab. Here they stocked up on obsidian, geodes, dinosaur “bones”, fossilized dino-poop, and desert roses. Then we spent the afternoon in the pool to escape the 100+ temperatures and run some errands (laundry, clean out RV, make beds, go to store, organize car, etc. Tomorrow and the next day we have LONG drives through Colorado and Nebraska to make our way to Mount Rushmore and Badlands (we hope). We’ll see how far we get tomorrow. 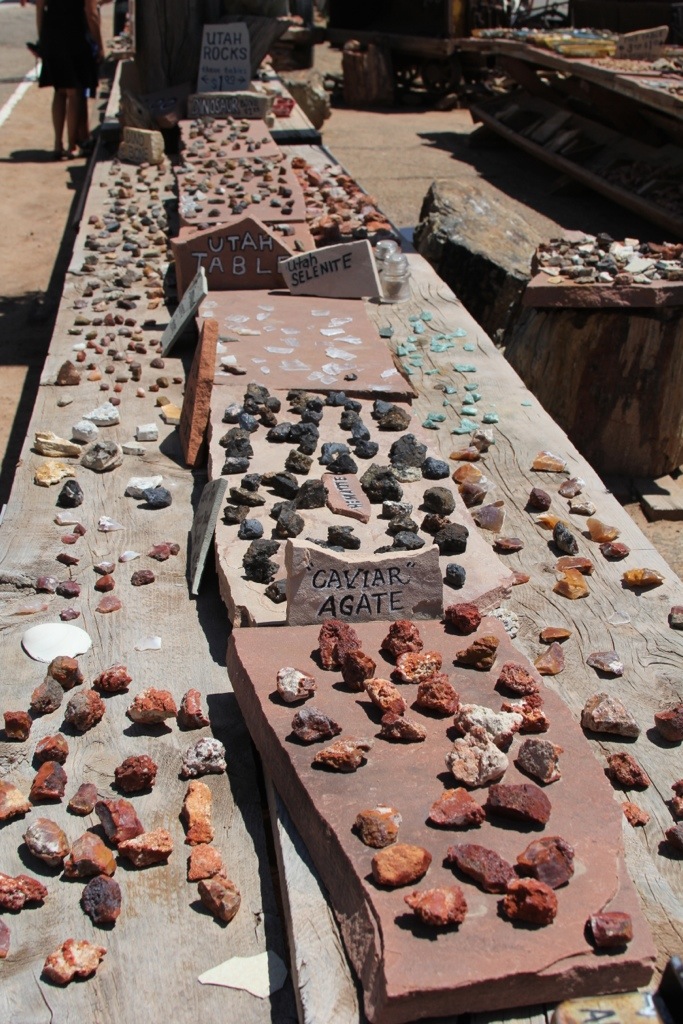