Walking the winding streets near our apartment in Barcelona we had come across several pintxo bars. Exhausted after a long day of visiting Gaudi sites across the city we thought a pintxos bar would make a quick and convenient dinner.

Pintxos are small tapas generally served on bread or skewers. When you walk into a pintxo bar the bartender hands you a plate and you self select the items you want from the bar. When you are done eating and drinking and ready to close your tab the bartender tallies your toothpicks and charges you for each one. There are hot and cold pintxos, with the cold ones being just under 2€ and the hot ones being just under 3€. You can run a tab up quickly. What we had thought would be a quick and cheap meal wasn’t as we wanted to try a few of everything at each bar. We also hadn’t realized that most pintxo bar are standing room only and our sore feet hand’t anticipated that (although we did see a few with tables in the back where you could take your plates).

We hit a few different places. The first was called simply Pintxos and the second was Irati Taverna Basca just around the corner and each of us ate a half dozen pintos each place. 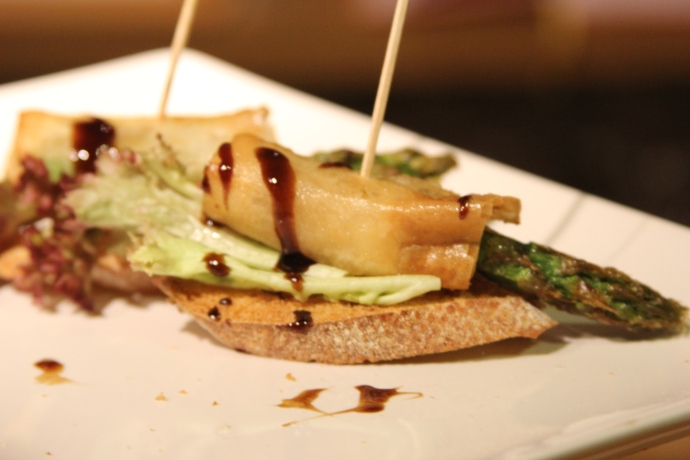 Despite eating our fill of pintxos we had saved enough room for churros and chocolate. The three of us went to a little place called Ménage å Trois just downstairs from our AirBnB apartment. It was a small bar but had advertised churros and chocolate on a placard outside the bar.

I’d had churros before but never dipped in Spanish hot chocolate. The hot chocolate was amazing! It was nearly the consistency of pudding it was so thick, so it clung to the churros like a chocolate fondue and it paired well with a Spanish brandy. It was a perfect way to end a great day in Barcelona. 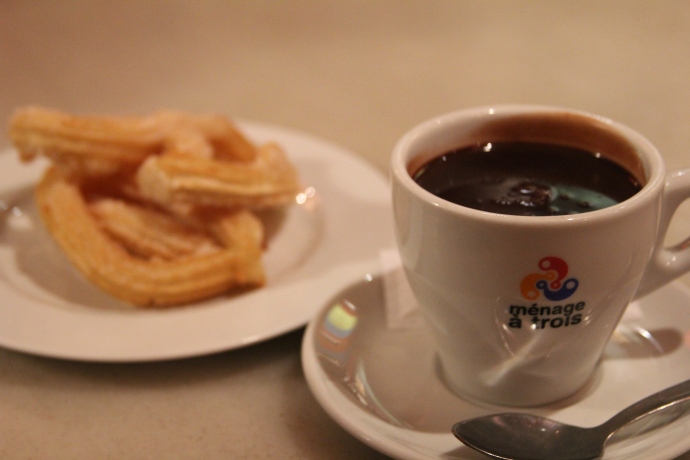 One thought on “Pintxos, Churros & Chocolate”