A late start to the morning (we are on vacation) had us head out just as the rain began. Donning umbrellas we made our way to the Elevador Da Gloria (a funicular) for a ride up the steep and slick cobbles to the Bairro Alto – Lisbon’s “High Town”. 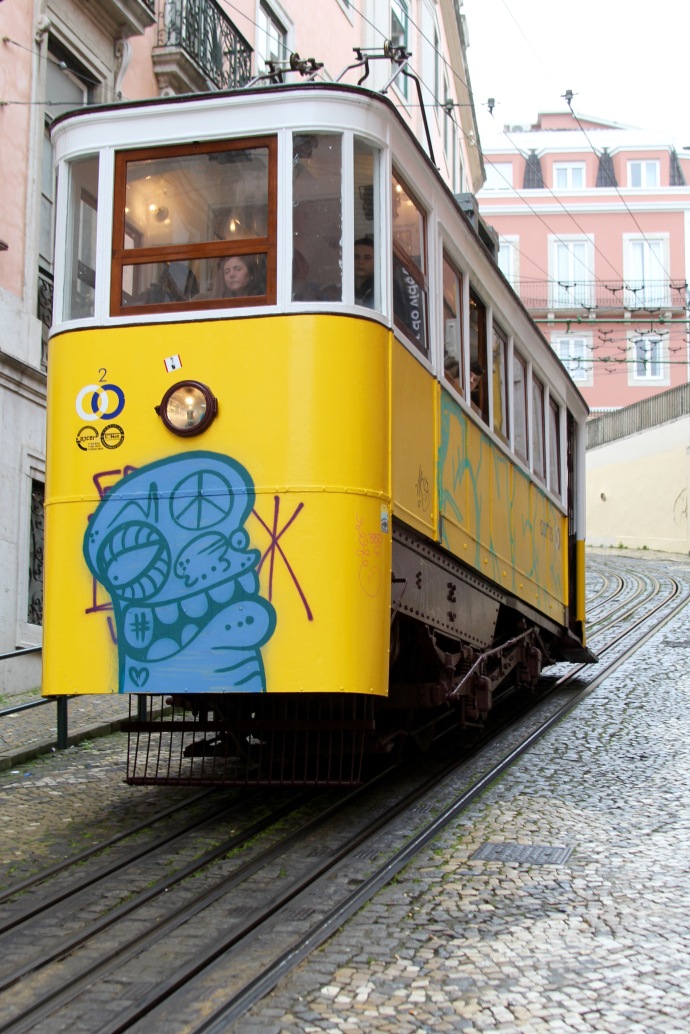 It was a very short (and overpriced) ride to the top of the hill. Stepping out of the trolley we were met with wild winds and driving drizzle our umbrellas were useless against. We stepped to the nearby viewpoint Sao Pedro de Alcantara Park for a quick view across the city. We could see the Castelo De Sao Jorge and the Alfama neighborhood we had explored yesterday. 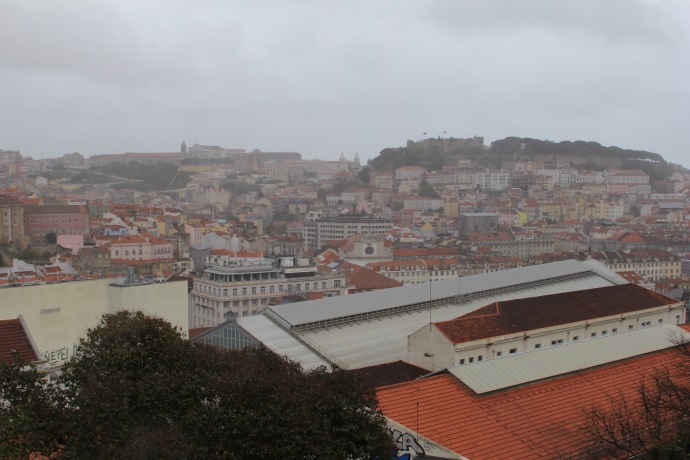 There was a nearby kiosk with some cover from the rain were we grabbed a warm up of coffee and cocoa while we tried to figure out what to do with the day (the Bairro Alto walk being shelved due to inclement weather). I decided to search Google for record stores in the neighborhood and found that there were several only a few blocks from us. We headed to them only to find they didn’t open until 2pm. We decided we’d come back later.

We wandered through the area and found ourselves in a new neighborhood called Chiado – a neighborhood of poets and artists. We found our way to an artisan shop of Portugese handicrafts where we bought a few items. Then we made our way back to an outdoor (but covered) cafe where we had lunch and watch a great street band play various alternative rock songs on the street in the square where the cafe was located. Clara struck up a conversation with the bass player when he came around asking for contributions. After complementing his bass playing and his bass (explaining she was a bass player herself) he invited her to sit in with the band. And to our surprise she did! You can see a video of her playing “Stand By Me” with the band here: https://www.facebook.com/madenwald/posts/10153840514137659 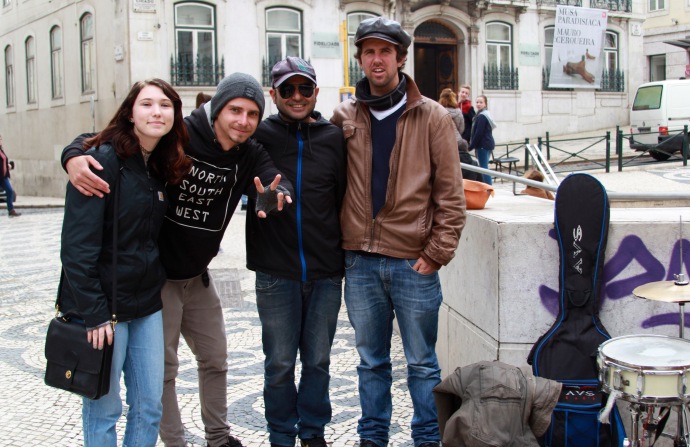 By the time Clara had finished rockin’ Chiado the record stores were open and we headed to one we had checked out earlier.

We got several good albums, and a few off our top 100 must find list. And we picked up a list of other Lisbon record stores across the city to check out. The rain had stopped and we decided to walk to a few of them. Unfortunately both were still closed so we headed back to our hotel for an afternoon rest. 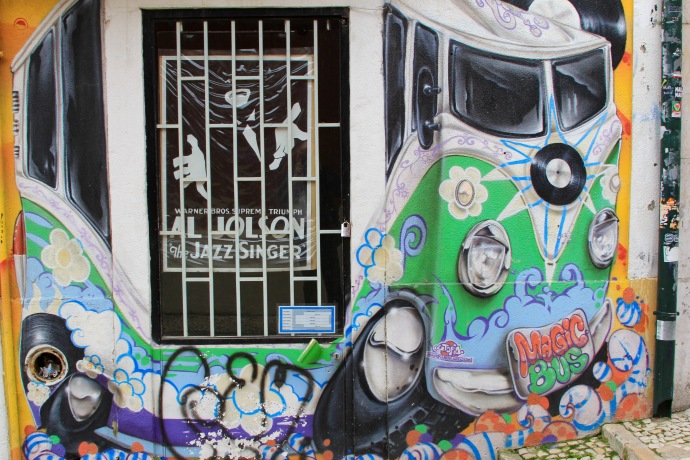 After a rest we decided to venture out again to walk to the end of the Baixa neighborhood to Praça do Comécio at edge of the Rio Tejo.

On the way we got trapped in a horrendous downpour with driving winds and found ourselves a distance from our hotel soaking wet. We dashed into a small wine bar called “Dr. Wine” where we had an afternoon snack of cheese, Iberica ham, and wine.

The rain let up a bit and we continued down the Rua Augusta to Praça do Comércio to see the broad plaza, bold statues, and former palace. It was cold. It was wet. It was windy. We didn’t stay long, but as the rain let up we walked our way back up into the Bairro Alto visiting a few basilicas and churches along the way to get a break from the weather. 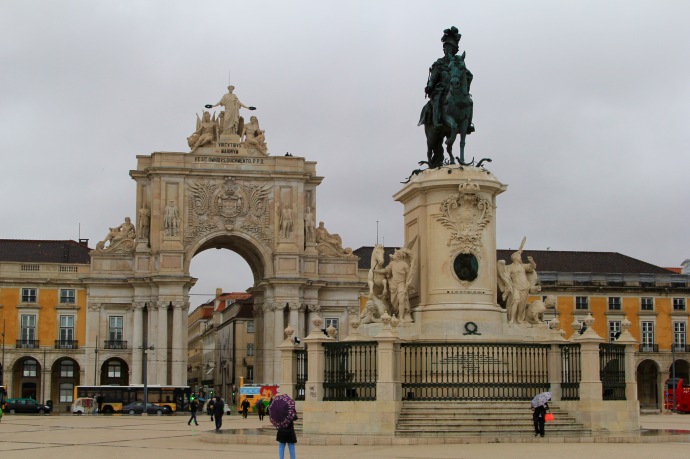 As the weather let up we wandered back towards and up the hills into the Bairro Alto looking for a Fado bar for dinner. We settled on one called Adega do Ribatejo that looked like (and turned out to be) a family operation filled with locals and tourists alike. Not only did our waiter sing a few songs, but a local (who perhaps had too much to drink) stood and performed a few songs as well before paying his bill and leaving. Even Mom (clearly the Mom in the kitchen) stepped away from the stove to sing a few as well after preparing me a very good (but very salty) carne de porco a Alentejana (diced pork covered w/clams). 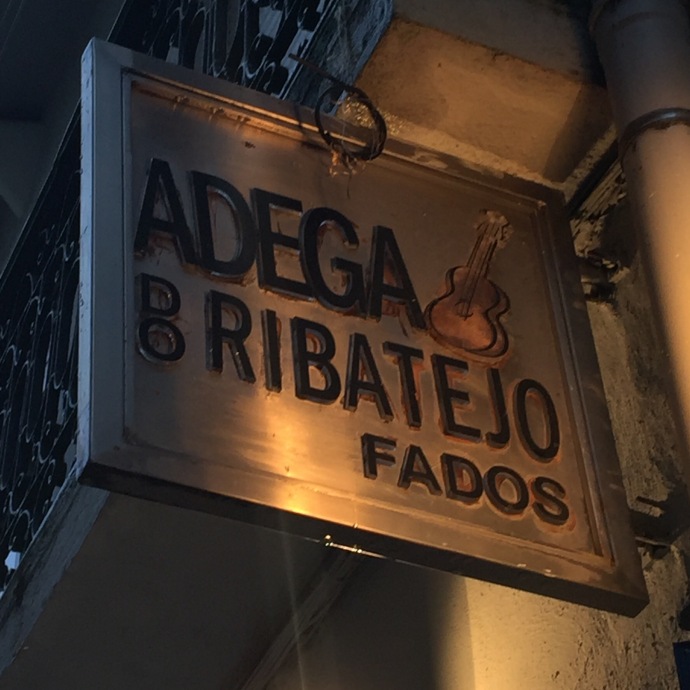 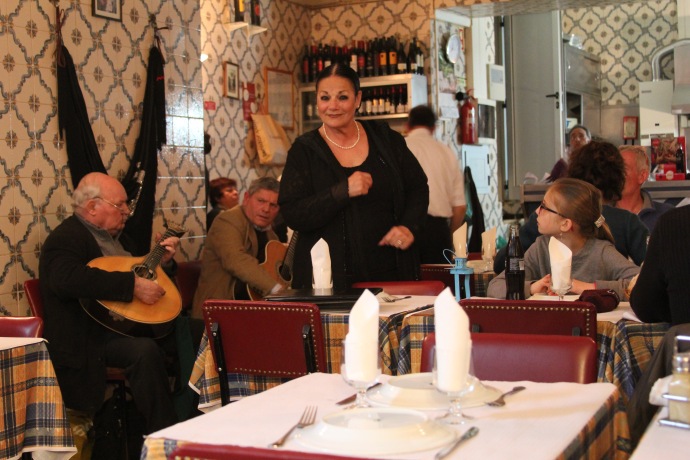 Buy the time we had finished dinner (and a bottle of good Portugese wine) the rains had let up and we walked back to our hotel for a warm and cozy night sleep.