Donald spent his first day as President worried about the size of his inaugural attendance. It was unbelievable. Having been in DC since Tuesday of Inaugural Week we saw first hand the low turn out of Trump supporters across the city. We were staying at the Marriott Marquis (attached to the convention center where the simpleton named “Liberty” and “Freedom” balls were held on Inauguration night). We ate at empty local restaurants and coffee shops, walked and commented on the deserted streets, strolled the ghostly Mall and its zombie apocalyptic atmosphere, and visited several sparsely attended museums. Throughout it all, the presence and enthusiasm of Trump supporters were dour and tepid. Even on the night of Trump’s big balls the 01%s in attendance (99% white attendees) swathed in furs and gowns had little enthusiasm amongst them. It was like the moment of trepedation at the prom in the movie Carrie (before Carrie had the bucket of pig blood poured upon her) everybody in attendence seemingly knew what they were doing was wrong but they were going through the motions regardless of the consequences.

We were with hordes of humanithy (estimates from 600k – 1m) marching in DC who were loving, enthusiastic, and united. It was a great day only made better by meeting some friends we haven’t seen for years at another José Andrés restaurant – Zaytinya. We had a great dinner (the restaurant was packed! The waiter telling us it had been near empty all week but today had been a madhouse). Then we stayed up late with our friends drinking in our room and watching Saturday Night Live. Brilliant! In particular, the segment on Kellyanne Conway was amazing. It was shocking to see her on Meet the Press the next morning telling Chuck Todd that Sean Spicer’s first official announcement as White House Press Secretary was presenting “Alternative Facts”. You may know these by their more common name: Lies. Defending Sean Spicer blatant lying to the whole world about the size of Trump’s inaugural attendance, (puny when compared to the Women’s March) was just mind-numbing. Not to mention Trump’s visit to the CIA during the Women’s March to declare war on the media and complain about his size.

We didn’t know what to do with ourselves. But we quickly figured it out. We went to the Newseum. The Newseum focuses on the First Amendment (the part about a free press) as well as the history and role of a free press in our Democracy. Freedom of speech gives Trump the freedom to lie to us, but also gives us the responsibility and moral authority to call him out for it.

The first thing we saw while waiting in line to get in (and more on display inside) were the front pages of today’s newspapers from around the country and the world. Here is a sampling of about 50 of them:

The Newseum is a great museum. It was powerful and moving. The exhibit on 9/11 moved me to tears several times (they have boxes of tissues strategically stationed around the display). I was so choked up and had to step away from the exhibit several times for fear I would absolutely sob and bawl out loud. 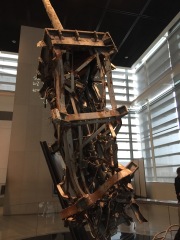 Another exhibit examples freedom of the press across the globe and the risks that journalists and photographers go through to bring us the truth. Many putting themselves in harm’s way or sacrificing themselves to document our story. Our Story. Our Truth. The Truth. Not “Alternative Facts”. I’d love to know where Sean Spicer and Kellyanne Conway deposited their souls for safe keeping before joining Trump’s team; if they had one to begin with.

There was another exhibit on the Berlin wall (with a watch tower and a section of the wall). You walked from the West Side to the East Side and experienced differences in the first (and other) amendments. It was bleak to realize how much some of the East Berlin sides sounded like Trump’s rhetoric. 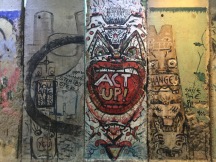 I choked up again at the Pulitzer Prize winning photo exhibit (100 years old this year and 100 photos on display with commentary). I didn’t take photos of the award winning photos (using an iPhone to take the pictures just seemed inappropriate). But I did find this quote good.

It was a great way to bring to an end a political trip of a lifetime. We joins hundreds of others (nearly the entire flight in pink hats) on our flight back to Seattle.