From First Women President to Women’s March on Washington

We planned to take our daughter to see the inauguration of the first woman president of the United States – Hillary Clinton. The best-laid plans….didn’t work out quite as we expected. But we already had the airfare and the hotels booked. We thought about canceling our trip after Trump was elected, but thought we’d cancel it at the last minute. Then we heard about the Women’s March on Washington. Given our President Elect is a sexist and a misogynist (not to mention racist, xenophobic, Islamophobic, ableist, authoritarian demagogue), we thought it would be important to bring our daughter to this march.

We headed out on Tuesday (a day after Martin Luther King Jr Day) so we could spend a little time in some of the DC museums before the March on Saturday (the day after the inauguration).

While boarding our plane we saw a good omen for our trip – Senator Patty Murray was on our flight. The “mom in tennis shoes” who has risen to be one of the top-ranking senators in the nation and an important line of resistance against a Trump Administration.

Tawny and Clara went to talk with her during the flight. She was somber, as she was heading back to DC to attend the inauguration (by the time we landed as many of 50 Congressional Democrats were refusing to attend. She told them she was attending the inauguration and was to be sitting directly behind Trump so would get a lot of television time. As such, she planned to wear her Planned Parenthood scarf prominently. She signed Clara’s ticket to the Women’s March and said she’d see us there.

We landed at National Airport and grabbed an Uber into the city. On the way to our hotel, we happened to pass Trump’s new and controversial hotel (in the old Post Office) which on inauguration day is going to put him in violation of his lease.

We settled into our hotel and started walking around the city and to dinner. It was interesting to see the fencing going up, the golf carts coming in, and all the other preparations for Trump’s big day (which was already looking to be like the most lackluster inauguration in modern history). 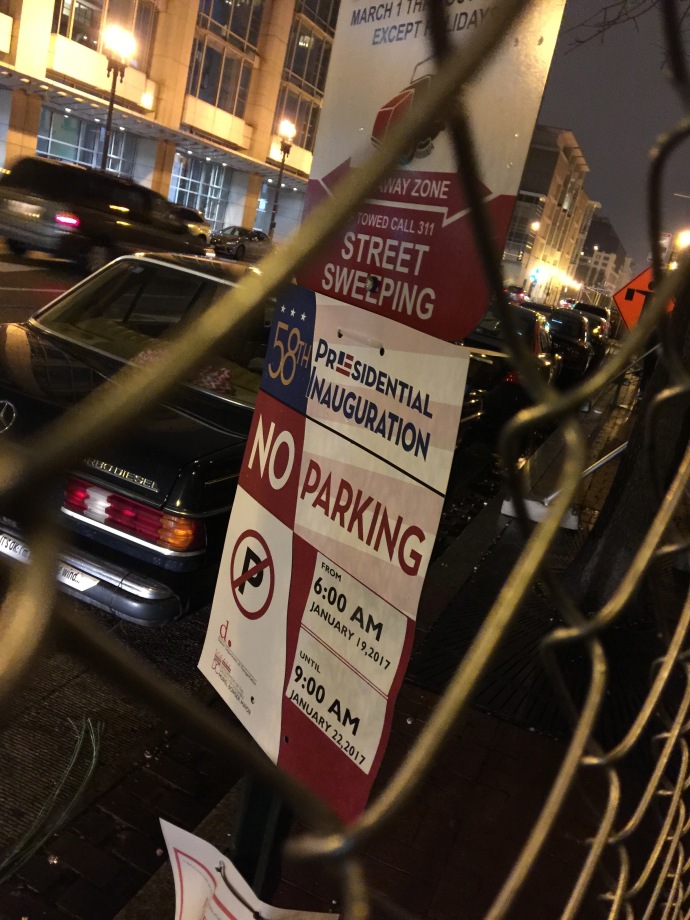